What Tariffs May Mean for Investments 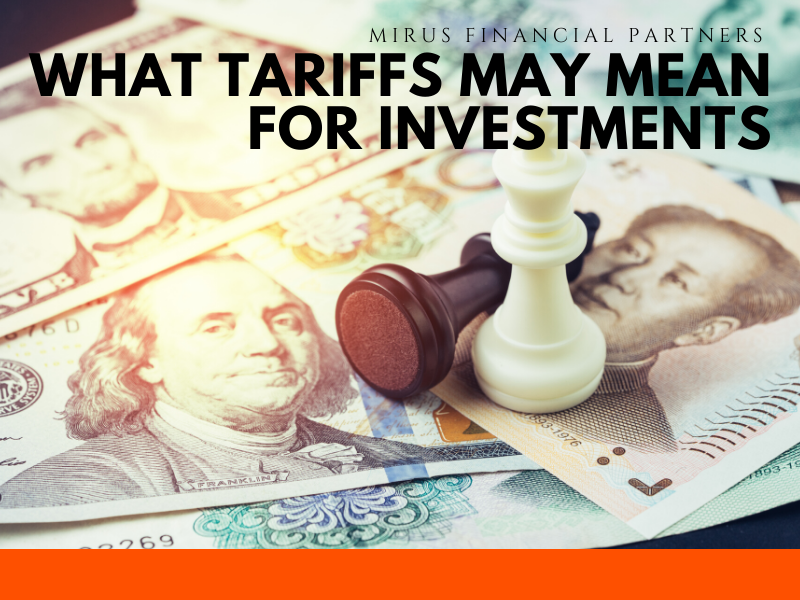 On March 8, 2018, President Trump imposed a global tariff of 25% on steel imports and 10% on aluminum imports.1 A tariff is a tax on a particular class of imported goods or services that is designed to help protect domestic industries from foreign competition.

The metals tariffs have not been well received by U.S. allies or U.S.- based companies that operate internationally. Many economists outside the administration think there could be unintended economic consequences, primarily because steel and aluminum are used in many other products that are made in the United States.2

For several decades, much of the world — including the United States — has supported the expansion of free trade and globalization, a position that the president has openly rejected. The metals tariffs are an  important component of the president's trademark "America First" policy, which could continue to take  center stage in the coming months.3

What are the Goals of Creating New Tariffs?

To justify the tariffs, the White House has invoked Section 232 of the 1962 Trade Expansion Act, a U.S. law that allows restrictions on imports for national security reasons. The president's proclamation contends that excess steel capacity is flooding into the country at below-market prices, harming U.S. metal suppliers and putting facilities out of business. The president and his Secretary of Commerce, Wilbur Ross, have suggested the tariffs are necessary to ensure the availability of domestic metal supplies that could be needed for defense or in the event of a national emergency.4

Are Tariffs a Bargaining Chip to Extract Other Trade Concessions?

The metals tariffs were scheduled to take effect on March 23, 2018. Argentina, Australia, Brazil, Canada, Mexico, South Korea, and European Union nations were granted temporary exclusions until May 1, pending continuing trade talks.5 Still, the possibility of permanent exclusions could be used to extract specific concessions from some trading partners.6

For example, Canada is the largest source of U.S. steel imports, and Mexico is the fourth largest. Together they account for 25% of foreign steel and 43% of aluminum.7 When negotiations end, Canada, Mexico, and South Korea may face quotas to cap export levels and prevent them from using exemptions to import and re-export cheap steel to the United States.8

The tariffs were specifically set to levels that should slow imports enough to allow U.S. industries to boost production to 80% of capacity. Granting exemptions, even to close allies, could defeat that goal and/or result in a heavier tariff burden on other nations. It's likely that the tariffs will largely apply to the remaining three major steel exporters: China, Russia, and Japan.9

Through a separate process, companies can apply for exemptions on metal imports used to manufacture specific products in the United States, although the details are murky for which types of businesses may qualify.10

The metals tariffs should offer relief to the struggling steel and aluminum industries and benefit some workers in the regions where they operate. But if the price of imported metals increases by 10% to 25%, the price of domestic metal is also likely to rise, and so could the cost of U.S. goods that must compete in international markets. By one estimate, the metals tariffs could add $300 to the price of a new car sold in a U.S. showroom.11

Significant inflation could hurt consumers, reduce sales, impact corporate profits, and result in job losses, especially for industries that depend heavily on steel or aluminum.

Metal Tariffs are Just one Part of Ongoing Issues

This is not the first time the Trump administration has used tariffs to restrict imported goods, and it probably will not be the last. In January 2018, tariffs were placed on imported washing machines and solar panels in response to complaints by U.S. manufacturers.12

When Trump first took office in 2017, he pulled the United States out of the Trans-Pacific Partnership (TPP), a trade agreement that was initiated in part to counter China's growing influence in Asia. With the U.S. out of the pact, a new agreement was signed in March 2018 by 11 key U.S. trading partners including Japan, Australia, Canada, and Mexico, creating a united front that could put the United States at a disadvantage in the future.13

The president has also threatened to withdraw from the North American Free Trade Agreement (NAFTA) if it is not reconfigured in favor of the United States.14 Failing to reach a new agreement with Canada and Mexico could be quite costly: One economic analysis concluded that terminating NAFTA would result in the net loss of 1.8 million U.S. jobs within the first year and reduce the annual purchasing power of U.S. households by about $654 each.15

The administration is also planning punitive measures that could make it more difficult for Chinese firms to acquire U.S. technology and invest in U.S. businesses. The package includes about $50 billion in tariffs directly targeting more than 100 types of Chinese products. Experts warn that China is likely to strike back, possibly by restricting imports of automobiles, aircraft, computer chips, and/or soybeans and other agricultural products, if ongoing negotiations do not produce an acceptable outcome.16

Another serious concern is that these and other protectionist policies may strain relationships with our allies, some of which have threatened to respond proportionally if tariffs are applied to them. The economic impact in the United States and globally will likely depend on whether a hard U.S. stance and/or the breakdown of trade negotiations escalates into a larger trade war. For now, you might see some market volatility in response to trade concerns.

All information herein has been prepared solely for informational purposes, and it is not an offer to buy or sell, or a solicitation of an offer to buy or sell any security or instrument or to participate in any particular trading strategy.  Investments in securities do not offer a fixed rate of return. Principal, yield and/or share price will fluctuate with changes in market conditions and, when sold or redeemed, you may receive more or less than originally invested.  Therefore, no current or prospective client should assume that future performance or any specific investment, investment strategy or product will be profitable.