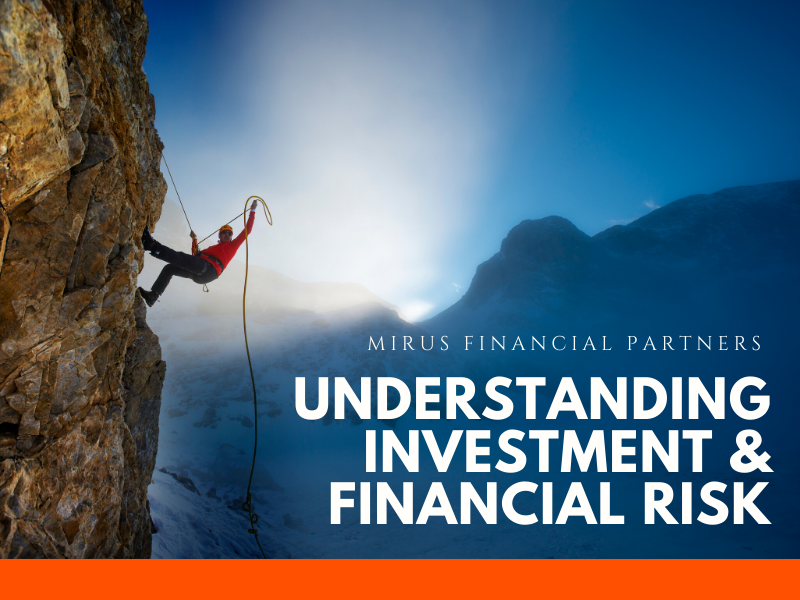 Few terms in personal finance are as important, or used as frequently, as "risk." Nevertheless, few terms are as imprecisely defined. Generally, when financial advisors or the media talk about investment risk, their focus is on the historical price volatility of the asset or investment under discussion.

What You Probably Already Know About Financial Risk

Even though you might never have thought about the subject, you're probably already familiar with many kinds of risk from life experiences. For example, it makes sense that a scandal or lawsuit that involves a particular company will likely cause a drop in the price of that company's stock, at least temporarily. If one car company hits a home run with a new model that might be bad news for competing automakers. In contrast, an overall economic slowdown and stock market decline might hurt most companies and their stock prices, not just in one industry.

This refers to the possibility that an investment will lose value because of a general decline in financial markets, due to one or more economic, political, or other factors.

Sometimes known as purchasing power risk, this refers to the possibility that prices will rise in the economy as a whole, so your ability to purchase goods and services would decline. Inflation risk is often overlooked by fixed income investors who shun the volatility of the stock market completely.

This refers to the possibility that funds might have to be reinvested at a lower rate of return than that offered by the original investment. For example, a five-year, 3.75 percent bond might mature at a time when an equivalent new bond pays just 3 percent. Such differences can in turn affect the yield of a bond fund.

This refers to the risk that a bond issuer will not be able to pay its bondholders interest or repay principal.

This refers to the possibility that new legislation or changes in foreign governments will adversely affect companies you invest in or financial markets overseas.

This refers to the possibility that the fluctuating rates of exchange between U.S. and foreign currencies will negatively affect the value of your foreign investment, as measured in U.S. dollars.

The Relationship Between Risk and Reward

In general, the more risk you're willing to take on (whatever type and however defined), the higher your potential returns, as well as potential losses. This proposition is probably familiar and makes sense to most of us. It is simply a fact of life--no sensible person would make a higher-risk, rather than lower-risk, investment without the prospect of receiving a higher return. That is the tradeoff. Your goal is to maximize returns without taking on an inappropriate level or type of risk.

Don't put all your eggs in one basket. You can potentially help offset the risk of any one investment by spreading your money among several asset classes. Diversification strategies take advantage of the fact that forces in the markets do not normally influence all types or classes of investment assets at the same time or in the same way (though there are often short-term exceptions). Swings in overall portfolio return can potentially be moderated by diversifying your investments among assets that are not highly correlated--i.e., assets whose values may behave very differently from one another. In a slowing economy, for example, stock prices might be going down or sideways, but if interest rates are falling at the same time, the price of bonds likely would rise. Diversification cannot guarantee a profit or ensure against a potential loss, but it can help you manage the level and types of risk you face.