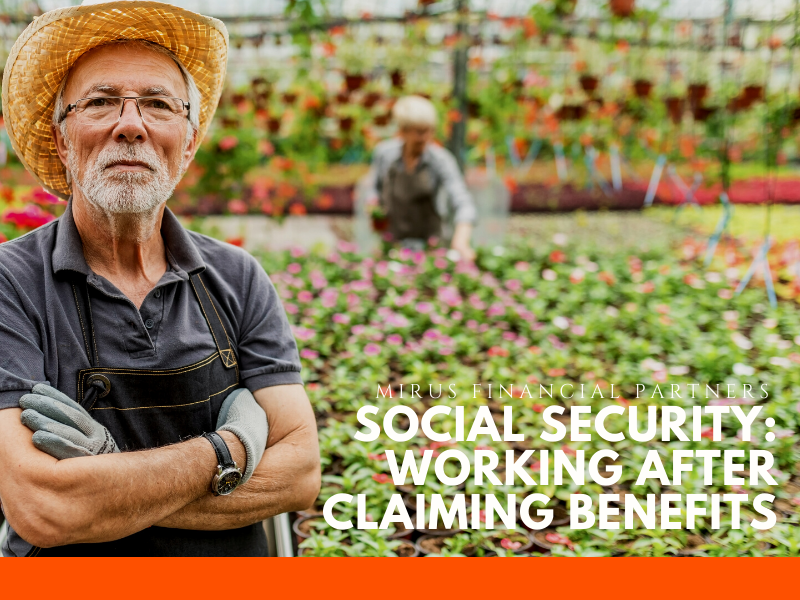 When and how you make your social security claims matters considerably. You may not know:

You may be eager to claim Social Security benefits as soon as you are eligible at age 62.

Know the Facts Before You Claim Social Security Benefits

Do you understand the complicated dance that comes with continuing to work after claiming benefits before Full Retirement Age (FRA)? It’s complicated and it involves giving up some benefits while working, but getting some back later. For a financial professional, it can even be a little hard to explain in simple terms, but I will give it a try.

Here’s the deal. Social Security recipients are allowed to work while claiming benefits. But if they are under FRA, they can only earn an annual set amount ($16,920 in 2017, for most) before the agency starts clawing some of that back at a rate of $1 for every $2 earned (earnings don’t include income from pensions, dividends, interest, capital gains, or other government benefits).

(There’s a different formula and earnings limit for workers who earned money during the year in which they reach FRA. We’ll get to that later.)

Maybe the first question is to ask yourself is “why are you claiming benefits early if you plan to keep working?” That’s something you should really think about, keeping in mind that your monthly benefit will be reduced for every month you receive benefits before FRA. That doesn’t mean they can’t or shouldn’t claim early, but it should encourage you to make a purposeful, mindful decision knowing all the facts.

OK, assuming you have decided to claim before FRA and you still want to keep working, here’s the drill.

Social Security’s example assumes a worker filed for benefits at 62, the earliest possible age, but continued working. In the example, the hypothetical benefit amount should be $600 a month ($7,200 a year) but the recipient earned $22,000 during the year, which is $5,080 more than today’s $16,920 threshold.

The process starts when the agency asks recipients how much they expect to earn each year.

Once Social Security has an estimate on how much the worker will make, it starts withholding monthly checks until it figures it has recaptured the correct amount. Any excess is returned in the first check of the next year.

You Could Get a Higher Monthly Social Security Check

Here’s the part that’s surprisingly fair. When the worker reaches FRA, the agency looks back. If it sees some checks were withheld because of excess earnings while claiming benefits, the agency recalculates the claiming date, adding a month to the claiming date for each month’s worth of withheld benefits. And that could mean a higher monthly benefit check going forward.

”Let’s say you claim retirement benefits upon turning 62 in 2017, and your payment is $964 per month. Then, you return to work and have 12 months of benefits withheld. We would recalculate your benefit at your full retirement age of 66 and 2 months and pay you $1,029 per month (in today’s dollars). Or, maybe you earn so much between the ages of 62 and 66 and 2 months that all benefits in those years are withheld. In that case, we would pay you $1,300 a month starting at age 66 and 2 months.”

In other words: you take two steps forward, get dragged back one, then get pushed ahead later. It’s that simple.

After reaching FRA, Social Security recipients can earn as much as they want without penalty.

And because the agency understands workers may earn a substantial part of their salary during the year they reach full FRA (say someone who reaches an FRA of 66 in October and then retires) the agency allows workers to earn up to $44,880 without penalty in the year they reach FRA, and for that one year, the claw-back is reduced to $1 for every $3 earned. For someone who plans to continue working full time after FRA, maybe there’s no need for the added income from Social Security.

Every situation is different. Consult with a qualified professional for answers to your questions based on your situation.