Should I be worried about recent municipal bankruptcies? 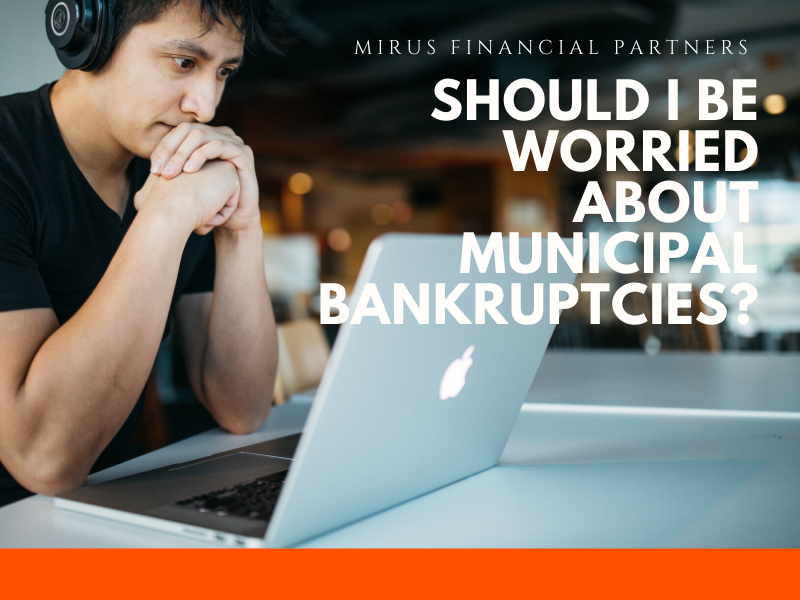 Municipal bonds have received a lot of attention recently, in part because their tax advantages could become more valuable in 2013. However, they also have come under scrutiny because of some widely publicized bankruptcy filings by local governments.

Economic problems, lower investment returns, and cuts in federal aid have led to an increase in the number of local governments filing under Chapter 9 of the U.S. bankruptcy code. They included the single largest U.S. municipal bankruptcy on record (Stockton, California, one of three municipalities in the state to file for bankruptcy in a single month).

Despite the increased pace of filings, muni bankruptcies are still extremely rare. From June 2011 to June 2012, only 17 municipalities or local government entities filed for bankruptcy in federal courts. Compare that to the 9,285 Chapter 11 filings by businesses during the same time.*

One way to check on your muni holdings is to use information available through the Municipal Securities Rulemaking Board's Electronic Municipal Market Access (EMMA®) database available at http://emma.msrb.org . You'll need to know the bond's CUSIP number; this nine-digit identifier can be found on a trade confirmation or brokerage statement. The information available generally includes there venue sources pledged to repay a bond and whether any bond insurance, letter of credit, or other guarantees have been provided for its repayment.

The database doesn't include all municipal offerings, and though it's updated yearly, information can become outdated. The bond's current credit rating from one of the three major ratings agencies can suggest its most recent status. However, remember that a high credit rating doesn't reflect or guarantee a bond's market value or liquidity.

*According to the Administrative Office of the U.S. Courts.

That may depend on your situation. Bond prices generally have benefited greatly over the last few years from low interest rates, and munis have been no exception. Also, income from munis is generally exempt from federal income taxes; that has enhanced their after-tax return relative to corporate bonds or U.S.Treasuries, especially since Treasury yields are at historically low levels.

Some munis, known as private activity bonds, may be subject to the alternative minimum tax. However, if there is no further legislative action to avert impending tax increases scheduled for 2013, the tax advantages of munis are likely to become even more valuable. If investors in higher tax brackets adjust their portfolios to try to minimize next year's tax bite, increased demand for munis might have a positive effect on prices. (There are no guarantees that will happen, of course, especially given the uncertainty over whether there will be a political bargain to avert the so-called "fiscal cliff.")

Because many local governments are struggling to balance their books, bankruptcy filings by local governments have increased in the last year. However, they are still extremely rare. According to statistics from the Administrative Office of the U.S. Courts, from June 2011 to June 2012 there were only 17 muni bankruptcy filings compared to 9,285 Chapter 11 filings for businesses, though some analysts have expressed concern that the number could pick up if economic hard times, cuts in federal aid, underfunded pension obligations, and challenges in global credit markets continue to take a toll. So far, dire predictions of disaster in the muni market haven't come to pass, but the situation is worth keeping an eye on.

Also, remember that current low interest rates won't last forever. Because bond prices move in the opposite direction from interest rates, when rates do begin to go up, the increase likely will affect the value of all of your bond holdings, including municipals.

Though transparency in muni markets has increased in recent years, bonds can be more challenging to research on your own than stocks. If you're unsure about whether munis are a good investment for you, or whether you should rethink their role in your portfolio, don't hesitate to get expert help.

MIRUS Financial partners nor Financial Network Investment Corporation give tax or legal advice.  Opinions expressed are not intended as investment advice or to predict future performance.  All information is believed to be from reliable sources; however we make no representations as to its completeness or accuracy.  All economic and performance information is historical and indicative of future results. Articles prepared by Broadridge Investor Communication Solutions, Inc. Copyright 2012