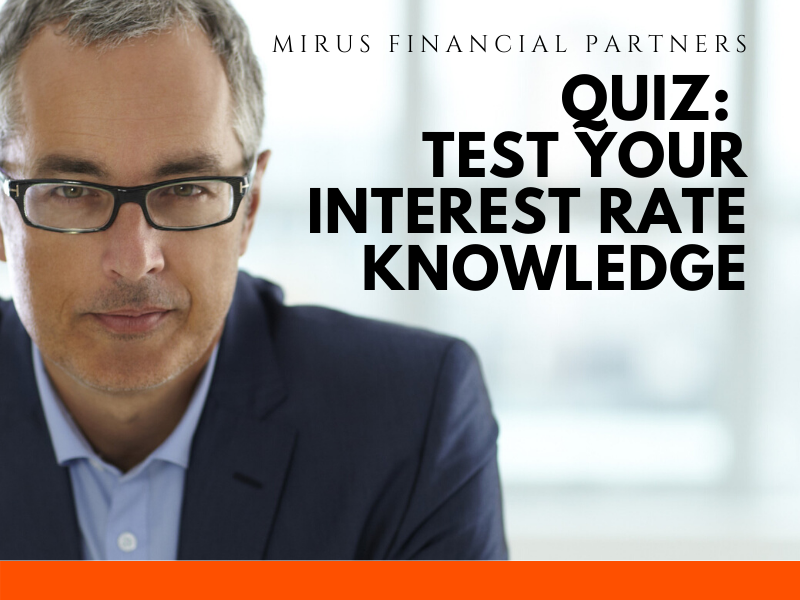 In December 2015, the Federal Reserve raised the federal fund's target rate to a range of 0.25% to 0.50%, the first rate increase from the near-zero range where it had lingered for seven years. Many economists viewed this action as a positive sign that the Fed had finally deemed the U.S. economy healthy enough to withstand slightly higher interest rates. It remains to be seen how rate increases will play out for the remainder of 2016. In the meantime, try taking this short quiz to test your interest rate knowledge.

2. Which of the following interest rates is directly controlled by the Federal Reserve Open Market Committee?

d. All of the above

e. None of the above

4. Rising interest rates could result in lower yields for investors who have money in cash alternatives.

1. b. False. Bond prices tend to fall when interest rates rise. However, longer-term bonds may feel a greater impact than those with shorter maturities. That's because when interest rates are rising, bond investors may be reluctant to tie up their money for longer periods if they anticipate higher yields in the future; and the longer a bond's term, the greater the risk that its yield may eventually be superseded by that of newer bonds. (The principal value of bonds may fluctuate with market conditions. Bonds redeemed prior to maturity may be worth more or less than their original cost.)

5. a. True. Higher borrowing costs can reduce corporate profits and reduce the amount of income that consumers have available for spending. However, even with higher rates, an improving economy can be good for investors over the long term.