Mutual Funds: Load or No Load?

Submitted by MIRUS Financial Partners on May 1st, 2019 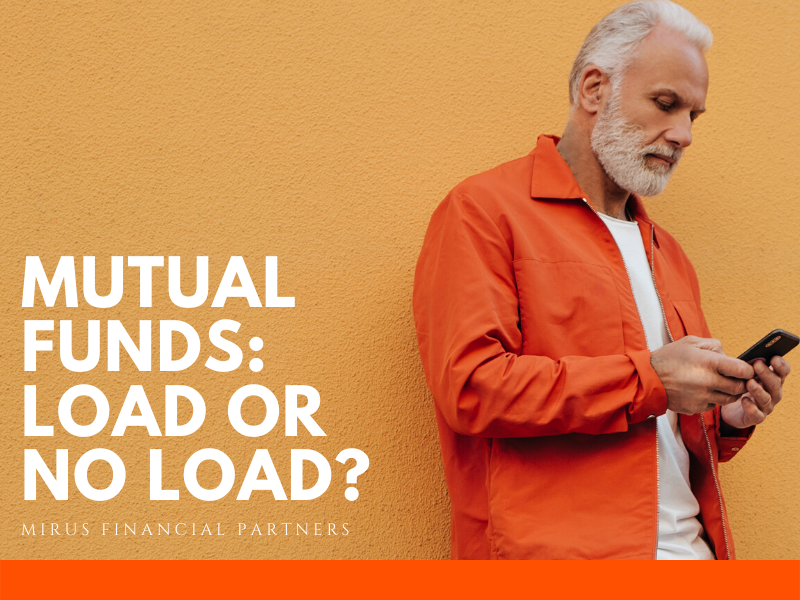 When you're choosing among mutual funds, you should take into account what the fund will cost you in fees and expenses. The higher those costs, the better the fund's performance needs to be to compensate for them. A 1 percent difference in expenses may not seem important, but that 1 percent can have a substantial impact on the value of your investment, especially over the long term.

1. Costs that are deducted directly from your account and are associated with your individual transactions, and

2. Indirect costs that are deducted annually from the fund's assets before its return is calculated.

You need to consider both types.

Load or No Load Funds?

One of the key decisions you'll face is whether to invest in a load or no-load fund. A load is essentially a sales charge or commission paid to the financial professional or organization that handles your transaction when you buy your shares. If it imposes a load, a fund typically does so in one of three ways:

1. A front-end load is paid when you buy your shares. This one-time charge is usually between 3 percent and 8.5 percent (the maximum is set by the NASD). A front-end load will affect how much of your money actually gets invested. If you have $5,000 to invest and pay a 5 percent front-end load, $250 will be deducted and the remaining $4,750 will be invested. The longer you hold a front-end load fund, the lower the impact on your return will be over time. If the load is less than 3 percent, a fund may be considered a low-load fund.

2. A back-end load or deferred sales charge is charged when you redeem your shares. Typically, it's calculated as a percentage of either your initial investment or its value at redemption, whichever is less. A contingent deferred sales charge (CDSC) is the most common form of back-end load. With a CDSC, the load percentage drops over time — for example, by 1 percent a year. If you hold the fund long enough, the CDSC charged when you eventually redeem your shares is eliminated.

3. Level load shares usually have no front-end load, and a back-end load of 1 percent if you redeem your shares within a year. However, a level-load fund typically charges annual 12b-1 fees (discussed below), and as your investment grows, the amount paid in 12b-1 fees rises. The load percentage may vary depending on how much you invest. Many funds set threshold amounts, called breakpoints, that affect the load you are charged; the more you invest, the lower the sales charge percentage. You also may be able to qualify for a breakpoint discount by signing a letter of intent promising to invest a certain amount over a given period of time. A fund with a load is not automatically better or worse than a no-load fund. However, you should make sure its return justifies its costs.

Loads are one example of what are often called shareholder fees. Unlike sales loads, other shareholder fees are not considered sales charges; a fund can impose them and still be considered a no-load fund. Depending on the fund, you may or may not be charged such fees. Examples include:

Some funds impose a fee if the value of an account is less than a certain amount. Indirect fund costs Every mutual fund charges its shareholders for its annual operating expenses. Those expenses are deducted from the fund's total assets before its return is calculated at the end of each year. If the fund's return is listed as 10 percent, your investment has grown by 10 percent, because the fund's costs have already been subtracted. A fund's expense ratio, which is expressed as a percentage of the fund's net asset value, reflects these annual costs. Comparing various funds' expense ratios lets you evaluate how much of any gains and earnings you actually receive. A fund's expense ratio can be affected by its size, how actively it trades, and the type of investments it includes. For example, an actively managed stock fund that invests overseas would probably have a much higher expense ratio than a fund that invests in a U.S. bond index. The lower the fund's average return, the more important its expense ratio becomes. The following are typical of annual fund operating expenses:

A 12b-1 fee covers marketing and distribution costs, and in some cases the cost of shareholder support services. It is split between the distribution fee, which cannot be higher than 0.75 percent, and the service fee, which is limited to 0.25 percent.

An administrative fee covers day-to-day operational costs, such as newsletters, record keeping, mailings, etc. The amount ranges from 0.2 percent of the fund's assets to about 0.4 percent.

Other fees may include trading and brokerage costs paid when the fund buys and sells securities, and interest on money borrowed money to buy securities.

To read more about the different types of investments available, check out these Mirus Financial Partners blogs: