Market Swings and the 2020 Election 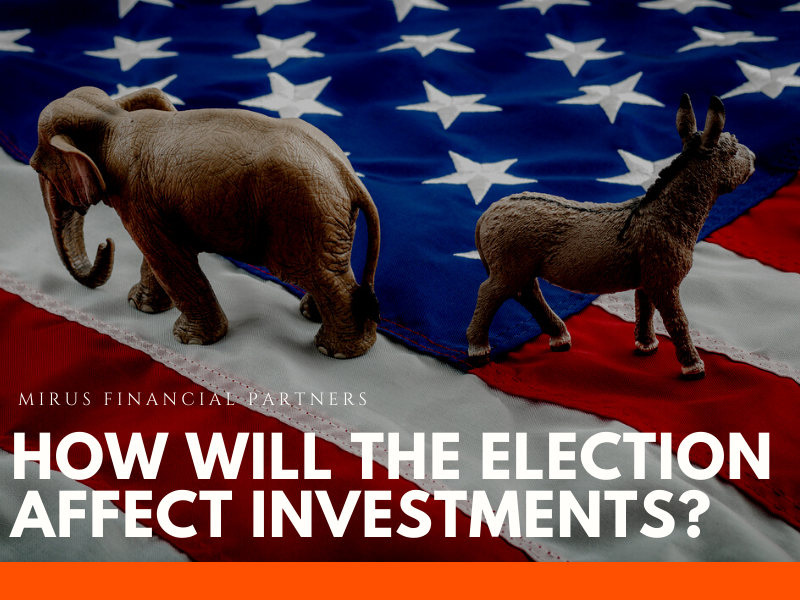 Few would argue that clear differences exist between President Donald Trump and Former Vice President Joe Biden on economic strategies, tax policies, and spending priorities strategies. That’s why the results of this election will not only impact policies, but it will also affect the financial prospects of individuals and businesses.

Opinion polls are too close to call, but the financial markets prefer clarity and tend to be more volatile when the near future is uncertain. However, in this election, uncertainties abound. The weakened economy, pandemic issues, concerns about election security, and the possibility of delayed or contested results, means that investors face a wide range of uncertainties.1

No matter who is elected, investors should prepare for predicted increases in market volatility in the weeks before and after the election.

President Trump wants to preserve his signature 2017 tax legislation, the Tax Cuts and Jobs Act (TCJA). The TCJA lowered tax rates for individuals at most income levels, roughly doubled the standard deduction, and eliminated the deduction for personal exemptions — so far fewer taxpayers now itemize on their tax returns.

The federal estate and gift tax exclusion was also doubled, reaching $11.58 million in 2020 (adjusted for inflation). This is the amount that can be transferred to heirs free of federal tax.

These changes to individual tax rates and the exclusion are temporary and scheduled to revert back to pre-TCJA levels in 2026.

For businesses, the TCJA reduced corporate tax rates from a top rate of 35% to a flat rate of 21%, repealed the corporate alternative minimum tax, and enhanced deductions for capital investments.

Pass-through businesses (including many self-employed individuals) received a new deduction equal to 20% of their qualified business income. TCJA changes affecting businesses are permanent.

Moving forward, Trump supports reductions in the capital gains tax, expansion of the Opportunity Zones program, additional middle-class tax cuts, and tax credits for companies that bring jobs back from China, although these are general goals, not detailed proposals.2

Former Vice President Biden charges that TCJA's tax benefits were for big businesses and the wealthy. He proposed tax increases for corporations and high-income households to help pay for his climate, infrastructure, R&D, health, and education plans.3

Biden would return the top personal income tax rate to 39.6% from 37%, which currently applies to income above $518,400 for single filers and $622,050 for joint filers. The tax benefit of itemizing deductions would also be limited for those with incomes above $400,000. The 20% deduction for qualified business income would phase out above the same $400,000 threshold.

A TCJA provision that caps the itemized deduction for state and local taxes at $10,000 would be repealed. Targeted tax credits would be offered to help make child care and housing more affordable for the middle class.4

Biden also wants to end the preferential tax treatment of long-term capital gains and qualified dividends for households with incomes above $1 million. Capital gains above that threshold would be taxed as ordinary income at 39.6% instead of today's 20% rate (plus 3.8% net investment income tax). The step-up in basis for inherited capital assets might also be eliminated, making more capital gains taxable after death.5 Social Security is funded by a 12.4% payroll tax — split between employers and employees — on wage and self-employment income, up to an annual cap that is adjusted for inflation ($137,700 in 2020). To address the program's growing funding deficit, Biden would also impose the payroll tax on income earned above $400,000.6

He has proposed raising the corporate tax rate from 21% to 28%, reinstating a 15% minimum tax on profits exceeding $100 million, and increasing taxes on foreign profits.6 Checks and balances The executive branch has the power to shape economic policies, but any changes to tax law require congressional action. Because tax policies are polarizing, the winning candidate may have little chance of achieving his policy goals unless the same party controls both the Senate and the House of Representatives.

The Role of the Federal Reserve

The U.S. central bank acts independently of the government in pursuit of its dual monetary policy goals: maximum employment and price stability. This autonomy allows Fed officials to make decisions based on evidence and analysis, theoretically free of political interference.

Policies set by the Federal reserve will affect a wide range of geopolitical issues and economic variables. The Fed plays a substantial role in supporting the U.S. economy and has acted aggressively to help stabilize financial markets in 2020. The benchmark federal funds rate was slashed to near zero (0% to 0.25% range) in March — where it's projected to stay for the next three years.7  Low interest rates are a tool used by the Fed to boost economic activity and asset values by reducing the cost of borrowing for consumers and businesses.

Which Election Outcome is “Better” for the Economy and Your Investment Strategy?

While the two candidates tend to favor different policies regarding international trade, financial regulations, energy, and health care, among others, neither candidate is considered a clear-cut winner or loser for investors. Some companies and industries could be impacted for better or worse, at least in the short run, by the election. The scope of fiscal stimulus that might be passed to help consumers, businesses, states, and local governments recover from the COVID-19 recession is another major factor that probably can’t be fully evaluated until after the election.

Long-term investors should avoid shifting investment strategies based on election predictions or their own political preferences. A well-balanced portfolio is built to span multiple election cycles. So while you may be rooting for one candidate, market volatility is likely based on election predictions or results. Long-term, either candidate offers potential risks and rewards for investors. No matter who wins, the financial professionals at MIRUS Financial Partners are here to help clients adapt and pivot when appropriate to position them for the best chance of long-term success.