The Bull Market Turned 10 in March 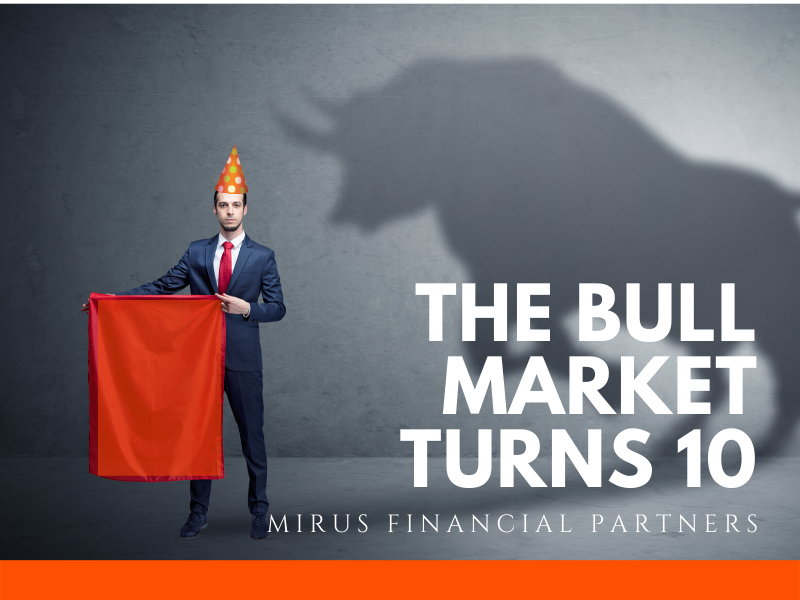 March 9, 2019, marked the 10th anniversary of the S&P 500’s longest ever bull market run. Why is this bull market having such a long run?

An Overview of the Market in the 2000s

As many of us now know, low interest rates and low lending standards resulted in a bit of a house of cards in the lending market back in the early 2000s. Banks sold risky loans to Freddie Mac and Fannie Mae, which are government-sponsored enterprises (GSE’s) that guarantee the loans. Without going too deeply into banking processes, loans were resold repeatedly and bundled into mortgage-backed securities (MBS.) These bundles were then sold to all types of investing entities. When high numbers of people started defaulting on loans, the resulting liquidity issues led to a string of bankruptcies, foreclosures, and business failures.

Efforts Made to Stabilize the Economy

With so many elements contributing to a falling market and the destabilization of the economy, the U.S. Government took a series of unprecedented actions in the fourth quarter of 2008, which included:

As a result of the financial crisis, the U.S. and World economy struggled for months, well into 2009. Some parts of the world economy suffered for much longer. U.S. unemployment skyrocketed to above 7%, America’s housing market crashed, and the S&P plummeted. On October 9th, 2009, the S&P 500 closed at 676.3.

Today, the unemployment rate in the U.S. is at about 4%, and we talk about labor shortages more than job shortages.  Although the S&P 500 had a negative calendar year return in 2018, the index is off to a strong start this year and is near its all-time high. On March 8, 2019, the S&P 500 closed at 2743.07, nearly four times the number recorded 10 years earlier.

While the Great Recession is now firmly behind us, investors should remember the lessons learned, which include:

While the current bull market is making some investors more willing to invest in high-risk investments, keep your long-term investing goals in mind. Remember that the market usually rises and falls on a regular basis. Over time, the market usually returns a 7% average return (but this average is not guaranteed.)

Talk to your financial advisor to develop an investment plan that makes sense with your goals, your life-stages, your financial situation, and your tolerance for risk.